Back to all posts

Hi all, Vaughan here. Just an update to let you know our session at Fattdog Studio went really well yesterday. I took all the tracks we have recorded so far and Dan imported them into his current version of Cubase. A lot of the recording has been done at my house, while Luke recorded all his guitar tracks at his house. It was great to hear all the tracks together through Dan's speakers. We did some vocal recording once the tracks were imported and we also did some initial mixing of the material. Dan is going to mix what we have and then we're going to decide what needs to be added. I was very happy with the way the album was sounding. It's an interesting mix of old and new, because it started life as a straightforward back to basics album. Now that Luke has contributed, it has elements of the last two albums as well. It will be interesting to hear where it sits with the rest of our material. Maybe a cross between "Beside The River Of Blood" and "The Fight Goes On" or something like  that! I am hoping to wrap up recording fairly quickly so we can get it released. I'll keep you all up to date with our progress. 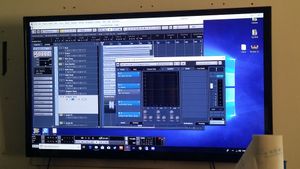 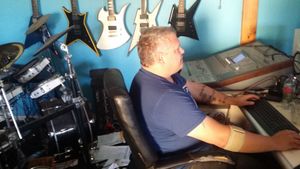